Which luxury automobile doesn’t feature an animal in its official logo?

Automobile plays a vital role in fulfilling the need for a luxurious life, it is said to be the basic and foremost need in today’s era where people like to travel in their private vehicle and not be part of public transportation. Many people nowadays have the habit of gathering information about the luxurious brands and try to be part of that to gain respect and popularity in society.

“Maserati” is a luxurious automobile brand that doesn’t feature any animal in its official logo.

‘Maserati’ is an Italian luxury vehicle manufacturer established on 1 December 1914, in Bologna, this family has laid themselves on the topmost position in automotive engineering and design. Maserati is said to be to a big brand in a list of a sports car and express the owner about his luxury and infinite power.

The Maserati brothers are the founder of this Company, the Maserati brothers Alfieri, Bindo, Carlo, Ettore, and Ernesto all were interested in technology and modeling of automobile right from their childhood. It is said that at the end of the 21st century they got more interested in the new mode of transportation i.e. car and soon got popularity in Italy. This led them to develop a new car with high speed equipped with a powerful engine and fully luxurious to make more popular and different from the others, soon they started with the racing cars with 4, 6, 8 or 16 cylinder engine.

Mario Maserati was very keen on artistic skills and so decided to develop an original logo for their business. Firstly the company was named Societa Anomina Officine Alfieri Maserati. The Trident logo of Maserati is based on the fountain of Neptune at Bologna’s Piazza Maggiore; this original logo was carried on throughout the life of Maserati Company. This logo is more appropriate for a sports car as the Neptune represents strength and vigor, the trident is seen as the source of power as the hands of Neptune shows the success for those who can see deity patronized and for the others, it seems like a threat, this threat was also seen amongst the other racing car company from the popularity and innovations of Maserati company. 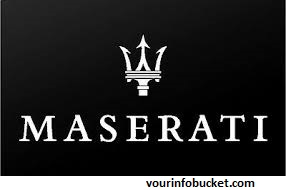 The original shape of the Maserati emblem was seen to be as oval and vertically elongated and is seen to be unchanged throughout the Maserati era. After some years the emblem was given more smoothening and finishes looking more appropriate than before. Nowadays this logo is provided with a convex nature and appeared with shadow to match with the latest era.

Font used by this company had changed a lot many times, but the color of the font always remained as white and always on a blue background; the font size of the logo was also kept unchanged. The original emblem was always black & white.

Which celebrity owns Maserati in India?

Maserati GranTurismo sport is a two-door coupe and it looks very amazing, it is powered by 4.8 liters naturally aspirated V8 engine which produces a torque of 520Nm and power up to 453 bhp, this is also equipped with 6- speed automatic transmission engine which makes it more efficient.

This car starts at $77,250, which is both a luxurious and sports car. This car uses a V6 engine with 8- speed automation transmission with start and stops functions.

This car has a maximum speed of 310km/h and an acceleration of only 4.7 sec. This car is equipped with a V8 engine and max power of 530hp and torque of 710Nm.

Which of the Following Technologies Precedes Horsemanship?

All About Ghd Oracle Technology 2023