The Player Unknown Battle Ground or PUBG is set to release in March and thus the players are very excited to take control over it. PUBG mobile was the preference for many gamers and after getting its released date again have enlivened a lot of gamers. In India the market set for PUBG Mobile was prodigious; hence Krafton Company is very keen on setting up its legs in the Indian Market again. There are many alternatives from PUBG mobile but the gamers are more fascinated with this game due to the great illusions and graphics provided by it.

IGN on YouTube released an official trailer for PUBG: New State which seems to be set for 2051 and had taken the gaming experience to next level. The pre-registration for android had started and will be released soon. The Krafton Company has persuaded its users that they had appended a lot to it and will make its users enjoy a lot out of it. 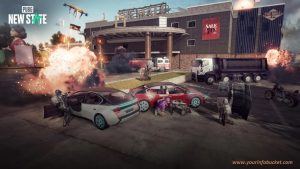 This PUBG: New State comprises of a lot of up-to-date weapons and the map seems to very effective from before, they also introduce drones into it for surveillance purposes so that you can keep the third eye on your enemies and thus will change the gaming level beyond imagination. The vehicles assigned are of modern type and seem luxurious as compared to preceding versions.

PUBG mobile had a huge market and users in India but was got banned by the Ministry of Electronics and Information Technology on September 2, 2020, under section 69A. The ban on PUBG mobile was made of having a co-partnership with Tencent games which is a Chinese company. The Krafton Company is South Korean and this time they assured the Indian Government to follow every single norm set by them. The newly released PUBG: New State did not have any relations with Chinese Company but still the ban on this game had not been removed. It was guessed that in March PUBG might get authorities from the Indian Government but still gamers waiting for this great news to happen. PUBG mobile made many gamers famous and also was a way of earning but due to its ban, their business seems to be impacted badly and thus awaiting for the decision from Indian Government in favor of Krafton Company. The announcement about PUBG Mobile 2 made many gamers set-up themselves again into it to get that popularity.

Pickleball is a Sport Anyone Can Play With These Awesome Facts

The Innovative Technology Behind Online Poker

Make The Most Of Online Casinos On Your Mobile