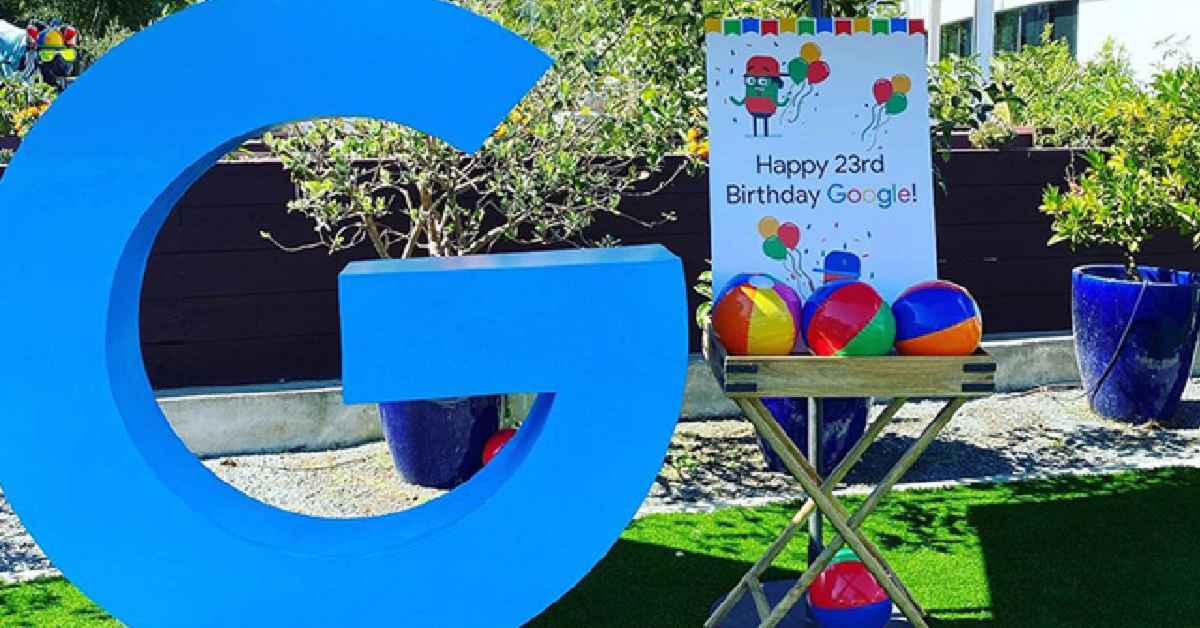 Today, September 27, Google’s 23rd Birthday is commemorated with a unique doodle on its homepage. But did you know that Google hasn’t always marked this day as its birthday?

For the fifth birthday, Google featured a doodle on September 8, 2003, whereas the fourth birthday was commemorated on September 27, 2002. And September 7, 2004, was picked as the occasion to honor the sixth birthday.

And to celebrate birthday number seven in 2005, the doodle was actually posted on September 26. Google has continued to use September 27 as the date, nevertheless, since 2006.

When was Google founded?

There have been many Google birthdays, even though September 27 has now remained the company’s official birthday. On September 15, 1997, the domain name Google.com was registered; if one uses 1997 as the year, then this corresponds to birthday number 24.

But when they were both students at Stanford University, Larry Page and Sergey Brin started working on the Google project in January 1996. But January has never been acknowledged as a birthday.

The corporation was formally established on September 4, 1998. Naturally, this implies that the best birthday would be September 4. Why then was September 27 chosen as the birthday? In any case, the day of September 27 was picked to mark a new record for the volume of pages Google was indexing.

Keep in mind that Google wasn’t the largest or only search engine available when it first launched. Although Google eventually surpassed Yahoo in market share, Yahoo was still far larger. Google has maintained the September 27 date for a few years, and it most likely will do so going forward.

Over the past few years, Google has developed into more than simply a search engine. Gmail, Android, the Play Store, and Google Assistant are available. Some of the most significant offerings from the corporation are YouTube and Google Meet. Yes, the majority of Google’s primary products today each boast more than a billion users, demonstrating the company’s continued dominance some 23 years after its founding.

Here are some of the major turning points in Google’s 23-year history:

Few businesses can lay claim to have had such a significant influence on the internet as Google. Google has played a significant role in altering how we interact with the outside world and consumes information, from search engines to advertising, email, and cellphones. Google turned 23 today.

Technically, Google will celebrate its 23rd birthday on September 4, 2021, but in 2005, the firm decided to celebrate by moving the date to September 27 in honour of setting a new milestone for the number of indexed pages.

In 1996, Google began as a research project on Stanford’s private network. In 1998, it got its first angel investment of $1,000,000, and as of this writing, it has a market capitalization of just under $2 trillion.

Here’s a look at Google’s amazing development from a college project to one of the most significant businesses of the twenty-first century:

1996: Google debuted as BackRub on the private network of Stanford University.

Google was first developed as a research project on the exclusive network of Stanford University by co-founders Larry Page and Sergey Brin. Page came up with the notion to crawl pages for backlinks and figure out how to rank them, which was first known as BackRub. Page and Brin collaborated to create PageRank, an algorithm that ranked pages based on how links between pages were used.

The most potent and influential search engine in the world would later be built on top of this.

A year before the business was formed, the Google.com domain was registered.

Andy Bechtolsheim, the co-founder of Sun Microsystems, gave $1,000,000 as an angel investment to Google when it was founded. Larry Page and Sujan Wojcicki go into Wojcicki’s garage, where Wojcicki would later take over as CEO of YouTube.

Google doodles are now universally associated with acknowledging and celebrating significant occasions. But on August 30, 1998, the Burning Man event marked the start of this. The search engine behemoth has a doodle on its homepage today in honour of its own birthday.

Schmidt served as the CEO of Novell and the CTO of Sun Microsystems before joining Google. In August, he was appointed CEO of Google, and among other things, he supervised the introduction of Android, Gmail, and Google’s IPO.

Before assuming the role of executive chairman, he held it for ten years.

One of Page and Brin’s biggest choices was to turn down Yahoo’s $3 billion takeover offer. The fact that they turned down the deal because they believed Google was worth $5 billion is the real zinger. With just $2 billion more, Yahoo would now own a corporation with a $2 trillion market value.

But who knows if Google had been purchased by Yahoo and whether it had ever seen the boom that it did.

Google introduced a news aggregation service named Google News after declining Yahoo’s offer earlier in the year. Later on, this would alter how digital news was disseminated online.

In 2004, Google launched Gmail on April 1st, one of its most significant services. This was first adopted because of its limited beta release, which offered free email with 1GB of storage.

The price of a share of Google is $2,844. The bonus shares, stock split, and rights issue that Google may have announced after the IPO are not taken into account by this, but it should still provide a fair indication of the wealth creation that has taken place over the past 17 years.

Andy Rubin’s Android operating system was purchased by Google. Google will later revamp it from the ground up to compete with the handsets made by BlackBerry and Microsoft’s Windows Mobile.

A scant year after the launch of the video site, Google paid only $1.65 billion to purchase YouTube. With over 2 billion users globally, it is currently one of the company’s most valuable assets. It is the second-most viewed website in the world, right after Google.

Google purchases DoubleClick in 2007 to strengthen its dominance in the advertising sector.

With the second-most costly acquisition in the history of the firm, Google strengthened its advertising division by purchasing DoubleClick for $3.1 billion.

Google releases the Chrome browser in 2008.

To introduce the Google Chrome browser, Google hired Mozilla Firefox engineers. In just 4 years, it overtook both Firefox and Internet Explorer, and it currently accounts for about two-thirds of all online browser users globally.

Google releases Android in 2008 alongside the HTC Dream.

In collaboration with HTC, Google has officially unveiled the first Android smartphone. The HTC Dream would later mark the start of Google’s supremacy in the smartphone market and serve as a signpost for the fall of Nokia, the market leader.

Google releases the Nexus One, their first smartphone, in 2010.

The Android developer partnered with HTC to release its first smartphone, the Nexus One, two years later. It utilized an unadorned variant of Android and got updates straight from Google.

Google introduces its own social network, Google+, in 2011.

In an effort to compete with Facebook and Twitter, Google developed its own social network, Google+. Later, it would close in 2019.

Google announces the purchase of Motorola Mobility in 2011.

In 2013, Google released the Moto X and the wildly successful Moto G after purchasing Motorola Mobility for an astounding $12.5 billion. Both of those wouldn’t be sufficient to stop Google from selling Motorola’s smartphone division to Lenovo in 2014.

With a skydiving demonstration by Sergey Brin, the Google X and ATAP groups debuted Google Glass as an experimental project. Although it didn’t lead to a lucrative new product line, it demonstrated Google X’s capabilities.

2014 saw Google purchase DeepMind, a move into the field of artificial intelligence.

Google purchased DeepMind, a UK-based artificial intelligence business, just beating Facebook to the punch. It is one of the main reasons Google has become an expert in speech synthesis and has increased data center effectiveness.

Google restructures under Alphabet Inc. in 2015.

Google underwent a reorganization and became part of Alphabet Inc. Since then, businesses like YouTube, Verily, and Waymo have joined the Alphabet family.

Launch of Google Assistant in 2016.

2016 saw Google revamp its hardware division with the introduction of the Pixel brand.

After previously shelving the Nexus brand, Google developed the Pixel brand to provide a variety of smartphones and audio peripherals.

The European Union fined the manufacturer of Android a record $5 billion for monopolistic and antitrust actions.

Google releases Tensor in 2021 as its first mobile chip.

Because Qualcomm powers the majority of Android smartphone manufacturers, including Google, they are unable to fully integrate hardware and software as Apple can with its iPhones and A-series chipsets.

In order to do this, Google unveiled the Tensor chipset, an internal creation that drives the Pixel 6 devices.

Also Read: Everything You Need To Know About Google Pixelbook 12in