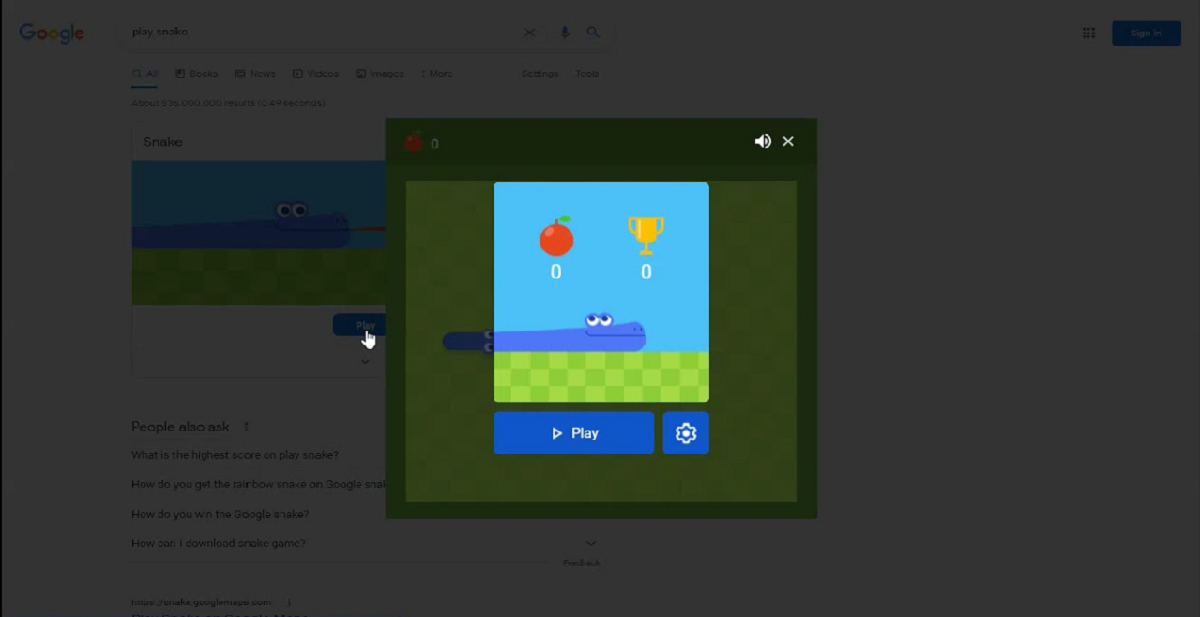 Play the traditional snake game with a twist and have fun! Get Google Snake Mods to spice up your simple game. Learn how by reading on!

Do you recall the retro game from your youth where you had to crawl about collecting red dots? It’s time to play the Google Snake game and stir memories like no before. Everyone recalls having at least one experience with the snake game.

A straightforward game that continues to be well-liked as new technology advances have undergone upgrades and adjustments. You may now alter the game in accordance with your tastes. The Google Snake Mods are these options you have to alter the game.

The fact that the snake game is enduring and addicting led Google to incorporate it inside their browser. Simply put Snake Game into the Google search box to have fun. Snake Game Mods work best, but, if you take a few extra precautions.

Simply described, modding is the process of making changes to a game’s files in order to add new content. Since it enables players to make improvements to games they enjoy, it is frequently seen as a crucial component of gaming.

A mod menu that unlocks a variety of in-game stuff has been uploaded by a developer on github as a way to simplify the Google Snake game. So here’s how to mod Google Snake if you want to score well, unlock plenty of fruits, and more.

Do you use dark themes on your computer, smartphone, and browser? So it only makes sense to enable you to play your preferred game with a dark theme. Because everything seems cooler and is far more fascinating when it is dark.

Uncertain about how to obtain the Dark Mod? Enter “window. snake. dark ();” when you click this link. The hyperlink will direct you to the download page. You also receive instructions on how to utilize the Dark Mod.

Use the “Cheese Mod” to give your snake game some excitement. There is a lot of unpredictable content in this mod. Like a snake, which is only active in specific locations. When you add this Google Snake Mod to your game, the enjoyment is doubled.

The procedure is the same for both the Dark Mod and the Cheese Mod. You may access the page where you can download the Mod by typing the name.

A game’s ability to modify the colour is unquestionably a wonderful feature. This is made possible by the “Google Snake Animated Color,” which gives you the option to alter the backdrop and snake colours. Choose from colours like blue, black, pink, yellow, and more to give the game a colourful twist.

Click this link to go to the page where you can download the mod. A wide range of options is available to you while making your dashboard.

The “Snake Wall Endgame Sooner” is yet another fantastic option for a Mod. Is it not entertaining when you can move about in a snake game for a very long period without hitting any walls? You can play this game for hours on end without ever losing.

If you’re curious about where to find these Google Snake Mods, read on. Just enter “snake. wall every apple ();” on the keyboard. The page from which you may download the game will be brought up. Get the Mod by following the procedures.

Any Board Size in Google Snake:

You are able to take down walls with the aid of this mod. You may change the size of the walls using a “Google Snake Any Board Size” tool. To give the snake a bit more time to survive, you can choose to move them closer together or farther away.

The snake will have two heads and a special game mode thanks to this update. “Twin Mod” is not only fascinating but also exhilarating. Installing this Mod gives you the chance to consume the food twice, which is a benefit. The drawback is that each head has the ability to destroy itself.

Twin Mod installation is comparable to that of other Mods. You may get the appropriate downloadable materials by simply searching for the phrase.

How can Google Snake Mods be added?

Knowing about Google Snake Mods alone is insufficient. You must learn how to unlock the Google Snake Mods in order to utilise them. The complicated process of installing GitHub is used to accomplish this. No need to fear; by following the instructions below, anyone can install and start using Google Snake Mods.

Step 1: Download the Github version of the Google Snake Menu.

Step 2: After that, download Moremenu.html to your computer, paying attention to where you store it.

Step 3: Press “CTRL+SHIFT+O” to bring up your browser’s bookmark menu.

Step 4: Importing files from Bookmarks is done here. To accomplish that, select the file import option by clicking the three dots.

Step 5: At this point, you should bookmark MoreMenu.html on your desktop. Then enter “Snake Game” to play it once on your Chrome browser.

Step 6: After that, click the three dots and proceed as follows: Add a bookmark and more menu items.

You may play through several maps and even alter speed after successfully activating Google Snake Mods for snake games. However, you must close the browser and start it again if you want to uninstall Mods. Alternatively, you may remove the Snake Game Menu bookmark from your bookmarks.

How will the snake game be modified?

The key to the snake game is a growing chain that expands as you continue to swallow frogs. Later on, it turns into the greatest obstacle. The snake in this game can also grow to a certain length, at which point you must stop its tail from swinging in order to reach the limit. The player will lose as the snake expands, thus your main objective is to attempt to avoid any potential clashes.

Why do you use the term “Mod games”?

The term “modding” refers to the changes you make to a game to suit your or other players’ preferences. You can modify one or more game elements, which will eventually impact how the game otherwise seems to function. Numerous changes might occur, ranging from modest adjustments to more significant redesigns. This will also make it easier for you to expand the game’s features and options. It gives modders a means to express themselves through particular alterations and enhancements, making the games even more enjoyable for everyone to play. What impact do the modifications have on the gameplay?

What impact do the modifications have on the gameplay?

Since you’ve been playing one game for a while, you could occasionally feel too worn out to continue, and at that point, you might feel like switching to a different module. Ambitious game developers think that by adding new features to an existing game through modifications, they may completely change its identity. A modder is capable of so much, from adding fresh visual effects to crafting amazing stories and adding a variety of inventive things. With only a few minor changes, some of the most popular games you can play today, including Team Fortress and Counter-Strike, got their start!

Prior to Google realizing this and officially introducing the “Blender Method,” this mode of play used to be the greatest. To merge the various experiences, you can now just utilize the built-in Blender Mode without lifting a finger. Therefore, there is no benefit to downloading this. Nevertheless, for your reference, here is the link.

Regarding the “Blender Mode,” Google now offers a number of alternative game modes that were previously merely standard modifications. Knowing all of the built-in game modes will help you stop downloading unused mod files. Therefore, let’s look at them.

The following are some of the top Google Snake hacking options:

The head and tail will shift orientations in the opposite way when the snake consumes the apple.

The most classic variant of the game is called “Classic Snake,” in which the snake keeps eating apples until it gets so huge that it hits itself or touches its own tail.

If you, the player, are not paying attention while the game is going on, the apple can hit the snake’s body. In order to avoid losing, it is evident that you must maintain a whole focus on the game.

Here, the user controls one snake, while the second snake is simply a mirror version of it. The game ends the instant your snake comes into touch with the mirror image since the mirror snake will behave exactly as your snake does.

For your snake’s food to appear, you must ingest a gold-shaped metal.

You can walk through as you choose because the entire snake is non-existent!

In portal mode, you see two apples, and as soon as the snake bites into one of them, its head pops out of the other. When the apple becomes sufficiently wet to yield another one, the game ends.

Walls appear out of nowhere at random, obstructing your movement.

You have two fruits in the poison fruit mode, and the snake will perish as soon as it eats the poisoned fruit. The decent apple’s form and taint need to be carefully considered.

In the peaceful mode, the game won’t end until you’ve successfully collected 252 fruits.

If you drive into the snake itself, the mod version’s endless map will finally come to an end.

The containers for the apples would be hidden in the game, and only certain positions would allow for their opening.

Are games that have been modified more intelligent?

Many gamers that enjoy creating and developing new concepts or modifying games to include new features find that modding is their favourite pastime. Another incredible benefit of game modification is the opportunity to share your customizations with other players online and get their comments. It really is among the greatest strategies to express your abilities and ideas!

Is there any potential for a profession in modding?

You may use modding as a stepping stone, but it cannot guarantee you work. Nevertheless, it might assist you in getting some experience that you can use later to highlight your portfolio if you decide to pursue a career in game development.

Thus, using this Google Snake menu hack is likely the greatest option available right now. If the process of implementation bothers you, you can simply copy and paste the custom.js code into

Chrome’s developer console and then enter the following command in the command window. To activate, type snake.more menu(); and press Enter.

Click on the three-dot icon in the top-right corner of Google Chrome to launch the developer console window. Select More Tools from here, then Developer Tools. On Windows, you can also enter Chrome’s developer console by pressing Shift + CTRL + J.