All About Dholera smart city Project

Many of us have thoughts in their mind that why India isn’t having smart cities like Shanghai, Singapore, Dubai, Tokyo, etc., you will happy to listen that India too is starting the first greenfield smart city project which is named as Dholera smart city. 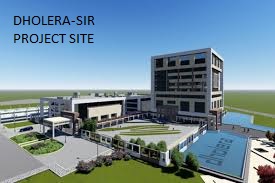 The Dholera Special Investment Region is also known as Dholera SIR, is a major new industrial hub in the south of Ahmedabad District. DSIR constitutes an area of approx. 920 sq. km. under the 22 villages of Ahmedabad district. It is built up near the coastal area where the soil quality is poor and thus not used for cultivation. It is said that this smart city is twice as big as our Capital city Delhi and six times bigger than Shanghai.

What is a Green Field Project?

What makes Dholera a smart city?

Dholera city has smart hospitals with many advanced technologies for the treatment of patients and also it is said that it has a Helicopter landing pad at the rooftop and many more features that make it a smart hospital.

Dholera city will have 10-way Express roadways so that there will be very fewer chances of road accidents and thus also improves the transportation facilities.

This city has a well ground infrastructure and has advanced level securities and facilities with a lot of plants and trees around to make the environment fresh.

water is the most essential part and thus for this, every house is equipped with high-quality water so that no one gets ill due to a low-grade form of water.

This city project has mainly focused on managing the traffic so that people do not have to waste their time waiting in ques of traffic and thus also decrease the pollution level in the city.

This city is fully connected to the internet system so that any complaints can be resolved soon and thus also provide the best securities out of it.

What are the facilities provided by Dholera SIR?

It is well seen in many metro cities that for this we have to go a long way out, but Dholera city has many such stations with engine recharge so that it will save your time and efforts.

Car recharge is the basic need and keeping this in mind the city project has also taken away for it so that their people may not wait in Que.

Dholera city also has city buses so that people can travel anywhere in the city so that they need not carry their vehicles.

CCTV’s are provided everywhere in the city so that they can reduce the crime rate and thus also increases the safety of their people.

Dholera city also gives you the best sports facilities so that your children get to train for any sports activity which they want and thus makes them physically fit.

Dholera city is all in one project, it’s work has started and many investors have invested out there from now and will be ready by 2023, as a citizen of India you must aware about this smart city with smart solutions and steps taken out there so that you might feel proud to be an Indian.

All You Need to Know About Universal Travel Pass System

9 Tips For Learning A New Culture While Traveling!

Australia Honeymoon Destinations that Will Blow You Away